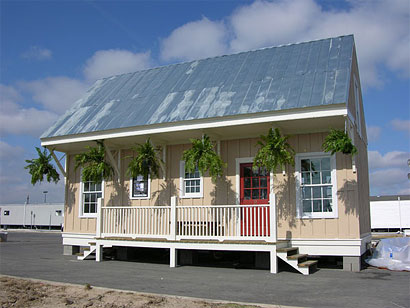 Here's a tour of the Katrina Kernal Cottage 2
At 523 square feet it is a potential replacement for those nasty FEMA Trailers. 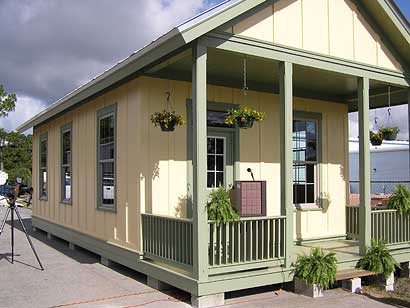 It was the same size as a FEMA emergency trailer, looks better and, while its initial cost was more than a small FEMA trailer, its advantages over the mid- and long-term were obvious given FEMA's track record of maintaining and disposing of their emergency trailers.
(A Kernel Cottage is a seed, or kernel, of the larger house it will grow into effortlessly through the Grow Zones. Thomas Jefferson built Monticello this way, living in one of the little cottages at the back of the house for several years as he built the larger main house. Much of America's traditional architecture is charming precisely because it has grown piece-by-piece over the years.) 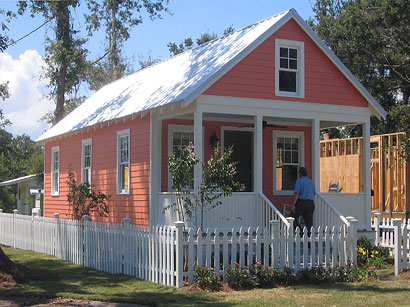 What began as a conceptual drawing for emergency housing by New York designer Marianne Cusato has grown into a series of designs that make affordability beautiful.
The many variations and possible uses for the flexible Katrina Cottages are getting noticed, says Cusato, who has fielded calls from Kansas City, Kan., (officials there want to use them as homeless shelters) to as far away as Ghana. A separate series of Katrina Cottages are being developed for the private-sector market.

From The Town Paper website Here's more on Katrina Cottages:
Deriving the simple definition of 'Katrina Cottage,' we have a unit that may be manufactured, modularized, panelized, or site-built, and is 1,600 square feet or under, says Steve Mouzon of The New Urban Guild, which is currently collecting plans for possible manufacturing and publication in upcoming plan books in the following Katrina categories:

The New Urban Guild is also working on a series of sub-types, which can be made from one or more of the principal types above. These sub-types include:

• Katrina Corner Cottage: Able to turn either the end or the side (or both, in the case of a corner lot) to the street
• Katrina Carriage Cottage: Technique for raising a Katrina Cottage an entire floor so as to park one car beneath
• Katrina Kernel Cottage: Cottage capable of expanding directly from the unit itself, not just by connecting porches and the like

Gary Delise, a resident of Arabi in New Orleans' St. Bernard Parish whose family lost their house and is now living in a FEMA trailer, says a Katrina Cottage would "beat a trailer by a long shot." He told Baton Rouge Advocate reporter Joe Gyan, "I think it would be a nice replacement. Not only a nice replacement, but a start to another house. If I could rebuild, that's what I would do. I'd like to have the house demolished and put this on it."

The history of the Katrina Cottage.

Here's a slideshow showing the construction of a typical Katrina Cottage.

Safer... cheaper... can become an actual home... why didn't Congress change FEMA's "no permanent structures" rule to allow these things long ago?

Here's another site with info about Katrina Cottages from a bunch of different sources.

Pretty helpful info, much thanks for the article.