- January 30, 2023
Phil Collins turns 72 today.   THIS is one of his best - turn up the volume! Same song from Live Aid in 1985 Phil has had a slew of health problems lately.  They''re sadly detailed at this link:   https://www.musictimes.com/articles/84129/20220310/phil-collins-health-problems-shocking-issues-drummer-suffers-explained.htm
Post a Comment
Read more 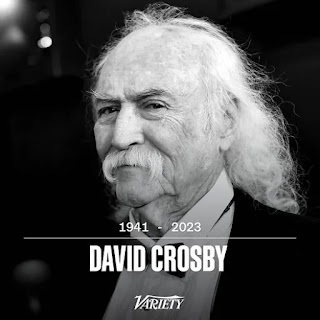 David Van Cortlandt Crosby  (August 14, 1941 – January 19, 2023) was an American singer, guitarist, and songwriter. In addition to his solo career, he was a founding member of both  the Byrds  and  Crosby, Stills & Nash . Crosby joined the Byrds in 1964. They got their first number-one hit in April 1965 with a cover of " Mr. Tambourine Man " by  Bob Dylan . Crosby appeared on the Byrds' first five albums and produced the original lineup's  1973 reunion album . In 1967 he joined  Buffalo Springfield  on stage at the  Monterey Pop Festival , which contributed to his dismissal from the Byrds. He subsequently formed  Crosby, Stills & Nash  in 1968 with  Stephen Stills  (of Buffalo Springfield) and  Graham Nash  of  the Hollies . After the release of  their debut album , CSN won the  Grammy Award for Best New Artist  of 1969.  Neil Young  joined the group for live appearances, their second concert being  Woodstock , before recording their second album  Déjà Vu .
Post a Comment
Read more

A guitar great from my generation passed away today, January 11, 2023. Jeff Beck was 78 years old. The cause was  bacterial meningitis  his publicist said. During the 1960s and '70s, Beck was a a member of   the Yardbirds.     One of the better songs from their album is "Over Under Sideways Down" from 1966.    Click below to listen This is the first song of Beck's I heard and it's still my favorite.  From his "Blow by Blow" album, the song "Cause we've ended as lovers, released in 1975.   Beck was inducted into the Rock and Roll Hall of Fame in 2009.  Here's a clip from him playing with Jimmy Page of Led Zepplin, performing Bolero/Immigrant Song and Train Kept A Running.
Post a Comment
Read more
More posts